Sleep Apnea - before and after

A story of a sleep apnea patient

This is the report of a 70 year old male patient who accepted occlusive sleep apnea examination. 11 months ago, the patient was worried that he may have sleep apnea and wanted to know his sleeping state, so he accepted a 3 day 2 nights examination at the hospital. The result showed that he has sleep apnea and the doctor recommended him to use n-CPP treatment. As he was unable to sleep well by wearing the equipment while sleeping, he gave up in the end. Like this, he escaped for about 1 year.

As he was still worried about his condition, he went to consult with the doctor again. The doctor changed his recommendation to using sleep print and introduced to him a dentist. Consequently, as he has a jaw with no teeth, he was also unable to wear the sleep print. He transferred to see Dr. Hosokawa in the end. Dr. Hosokawa recommended him to use Patakara. After 5 weeks of using Patakara by chance, he underwent the 3 day 2 nights examination again as recommended by the doctor 1 year ago. The examination result is shown in the after use diagram. The stop time of sleep apnea and blood oxygen content can be seen from the examination result, which showed that both conditions improved evidently. 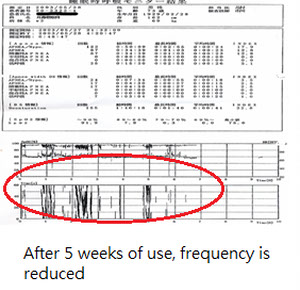 After 5 weeks of use, 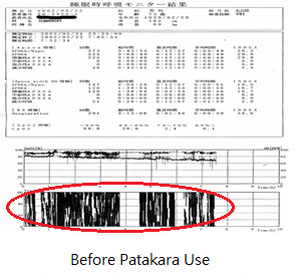 and Arrhythmia disappeared after two months

of going to the toilet in the middle of the night

It was ten years ago when I was diagnosed with high blood pressure. It was often on the way to deliver goods that I felt my neck's tendons tighten and then I get a headache. Sometimes I get dizzy when I stand to work. After gotten diagnosed with high blood pressure, I started to take anti-hypertensive medication. My normal systolic blood pressure is 200mmHg, diastolic blood pressure is 120mmHg and when I have a headache, my systolic blood pressure will sometimes reach 250mmHg. It was about five or six years ago when my chest suddenly became tight, my pulse stopped and other symptoms of arrhythmia emerged. After having taken medication, the tightening of my chest improved but the stopping of my pulse still occurred. Due to the instability of my heart condition, the doctor was unwilling to perform my cataract surgery, which caused my cataract to deteriorate continuously. In the end, the things that I could see turned out to look like being wrapped in a layer of white film.

It was at the end of Heisei 11th year when my dentist and friend told me: "There is a device that improves snoring with great results" and recommended me to use it. My snoring condition is extremely serious. One time when I was hospitalised due to dizziness, another patient who shared the same room as me objected that my snoring was too loud, causing that patient not being able to sleep, so I had to change to an individual room. After starting to use Patakara, apart from using it 2-3 minutes each time every morning, midday and night, I will find the time to use it more, so I use it about 5-6 times a day.

When I first started using it, the areas around my mouth felt sore but I adapted to it after a period of time. When doing Patakara exercise, I will also have a towel handy, as the saliva will sometimes flow out.

My family told me that during my use of Patakara for about 3 months, my snoring sound substantially became smaller and respiratory arrest no longer occurred. And I was most surprised that I used to have to get up to go to the toilet 4-5 times in the middle of night has now become twice.

My condition is a variety of symptoms mixed together. The doctor said that to target a particular symptom to do individual treatment is not easy. However, it was after doing Patakara exercise that various symptoms seemed to start going in the right direction. In future, I will continue to use Patakara to maintain my health that I had just managed to get back.

Sleep apnea is the same as snoring. It is also due to the sinking of the tongue up to the respiratory tract, which causes brief respiratory arrest. Sleep apnea will cause reducing of the blood oxygen content and become one of the reasons for causing arrhythmia, cardiovascular disease, diabetes, high blood pressure and brain stroke. The use of Patakara exercise to stop the sinking of the tongue can avoid these dangers.

She said that she recently did not have to get up in the middle of the night to go to the toilet; her head does not hurt when she gets up and her family told her that they also do not hear her snoring sound now. She smiled and said: "Due to throbbing in the past, I feel unwell when chasing after my grandson not even for three steps. I can now run 30m no problem," left a profound impression on me. In regards to her suffering from all kinds of problems caused by sleep apnea in the second half of her life, this madam said: "I did not think that my body could still recover to my current health condition."