Drooling - before and after 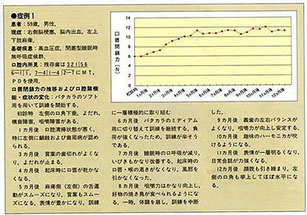 Circumstances in increase of lip closing strength and oral function, changes in symptoms:

First Visit: corner of the mouth on the left side droops, drools, dysarthria, chewing disorder.

After 1 month: Very poor oral hygiene condition. In particular, tooth decay was found on the left side Periodontal disease.

After 4 months: No longer has a dry lip upon waking up.

After 5 months: Paralysis on the side (left side) of the tongue can exercise smoothly. Also speaks smoothly now. Facial expression became abundant, carries out training more actively After 6 months: Change hardness to harder training device, became very strenuous when using as elasticity is more powerful. After 7 months: Reduction in opening of mouth when sleeping, snoring improved significantly, lips and throat no longer feel dry when getting up, no longer has condition of influenza infection.

After 9 months: Balance of dentures on left and right side became better, chewing became stronger and more stable.

After 10 months: Can play the harmonica.