Atopic Dermatitis - before and after

Beautiful skin after 2 months use

Pus excretion in the area affected by Atopic Dermatitis causes me to change underclothes every 2 hours - M. Chika (25 years old)

I had atopic dermatitis since I was an infant and my condition started to deteriorate when I was entering high school. Since then, I spent many miserable days of having to go to dermatology. My situation was that my whole body was dry and itchy like skinning something off, as I scratched it till my skin became red and swollen. This is not the end of it, as the following itchiness is unbearable. This kind of situation continuously repeats itself. My body becomes more serious when it is hot and itchy, so it is almost impossible to sleep. Despite trying to endure it and not scratch it during the day, I still scratch it unconsciously while sleeping at night. Sometimes when I get up in the morning, my underclothes and bed sheet are all covered in blood.

In respect to wearing cotton material, although I dare not wear fibre and tight clothes, my waist and abdomen will still itch due to stimulation by the fabrics.

My most serious symptom is below the knee, inside and outside the elbow, and around the neck to the collarbone and back. Yellow fluid and pus will flow out from the wound from scratching and I need to change clothes once every 2 hours. Sometimes there is no time to wash my clothes, so I simply use a white cotton bag to wrap them.

Of course I often go to dermatology to get steroid cream and anti-pruritic drugs. It does not itch after having applied medication. However, 1 month after having stopped medication, it immediately returned to the situation before the taking of medication.

After this kind of situation occurred repeatedly, my skin became thick and black in the area where the symptom is more serious. My scratch wound was untreatable and cracks also appeared, like an elephant's skin. Due to long-term application of medication, my facial skin became so thin that you can even see red in the blood veins.

In mid-January of 2000, a friend introduced Patakara to me knowing that it can successfully treat atopic dermatitis. I was skeptical at the time but I thought that I would give it a try, so I went to the dental clinic to get treatment.

During treatment, the doctor taught me to insert a plastic device between my upper and lower lips, and to close it tightly. This way, the training of the lip's muscles can improve atopic dermatitis. Therefore, I decided to use Patakara at home seriously. For example, when watching T.V. or playing video games, I wear the device and close my mouth tightly for 1 minute, 8 times a day. Just like that, I stopped going to dermatology and no longer had to take medication.

In the beginning, my lips did not have any strength. It was extremely strenuous when forcing to close my lips that my face promoted heat and I still could not close it. However, after constant training every day, I could gradually close it for longer.

The effect of Patakara exercise firstly shows when you get up in the morning. After about 1 week, my case of throat irritation and dryness every morning was gone. The dentist also told me that my bad breath had changed slightly. Before that, I did not know that I had bad breath but I thought to myself that perhaps this is a sign for turning for the better.

Sure enough after 1 month, the itching of my whole body gradually reduced. The first time that the itching stopped before I scratched it made me so happy, so I decided to put in a lot more effort in using Patakara.

As a result, after using it for almost 2 months, starting in early March, the skin of my collarbone and knee that turned black gradually restored to normal skin from continuously not being able to recover.

It has been more than 3 months of using Patakara from the start till now. My dark skin has disappeared and my whole skin has turned white. Now, the trace of atopic dermatitis is what remains of small white spots and the redness on my facial skin has disappeared. However, what makes me most happy is relief from the case of unbearable itchiness of my whole body. I will still continue to put in the effort to use Patakara and absolutely cannot allow the recurrence of my itching nightmare. I also hope from then on afterwards to not have to go to dermatology again.

Ms. Miyoshi has throat inflammation. After the improvement of her oral breathing via using Patakara, her throat inflammation gradually drained away and so her skin's symptoms also reduced. Atopic dermatitis is generally considered to be caused by genetic factors. However, from the perspective of the improvement rate obtained from using Patakara, oral breathing should be the reason. The promotion of development of the mouth's muscles is through the movement of feeding on breast milk during infancy. However, the lip closing strength of children who drink milk using baby bottles is too weak, as their lip strength was not trained. Therefore, it turned out that oral breathing causes atopic dermatitis.

This patient is a 25 year old female diagnosed with atopic dermatitis. She was informed that it will take approximately 2-3 months for her to recover from atopic dermatitis. The patient was asked to do Patakara exercise 8 times a day. 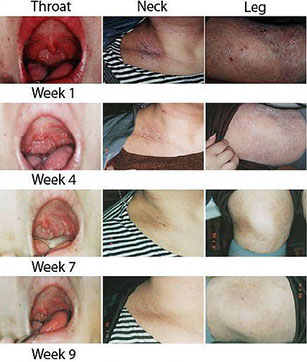 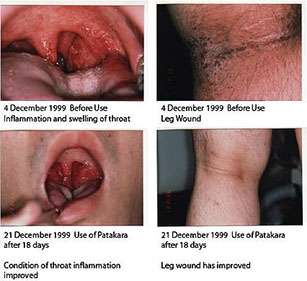